T-Rextasy has arrived at the top of the charts. Over the next year and a bit one band, led by one tiny little sparkling pixie, will dominate the top of the UK singles charts, and bring with it the defining sound of the early seventies. Wham bam, yes it’s glam!

But the intro to ‘Hot Love’ is actually quite gentle, quite lilting. A boogie-woogie bassline and some light strings. It’s still an intro that makes you sit up, that sounds unlike anything that’s topped the charts before – one of those leaps forward that come along every so often – it’s just not instantly ‘T. Rex’. Well she’s my woman of gold, And she’s not very old, Uh-huh-huh…

Tyrannosaurus Rex had spent the tail end of the sixties recording psychedelic folk-rock with mystical themes (sample title: ‘By the Light of a Magical Moon’). As the seventies came around they dropped the ‘yrannosaurus’ and plugged their guitars in. But here, Marc Bolan is still singing like a hippy: Well she’s faster than most, And she lives on the coast, Uh-huh-huh… Note the Elvis stutter, though. You can be sure it’s deliberate. Bolan wasn’t afraid of comparing himself to the greats.

One of the complaints most often directed at Marc Bolan is that his lyrics are nonsense. But to say that is to miss the point completely. Firstly, any man who can produce lyrics like ‘I drive a Rolls-Royce, Cos it’s good for my voice’ is a stone-cold genius. But secondly, glam rock, essentially, isn’t about the lyrics. The lyrics are just something to hang all the sequins and hair-sprayed wigs on. At the same time, if you listen again, and squint a little, you can squeeze meaning out of them: Well she ain’t no witch, And I love the ways she twitches, Uh-huh… I’m a labourer of love, In my Persian gloves, Uh-huh-huh…

These lines paint him as a gigolo, a dandy, a Byronic figure marauding the countryside giving the ladies hot love all night long. And then, 1:15 in, glam rock truly arrives. The lead guitar kicks, Bolan screeches, twice, like a vampire going straight for a virgin’s neck, before letting out a lascivious, drawn-out moan…. Uuuuuuh… 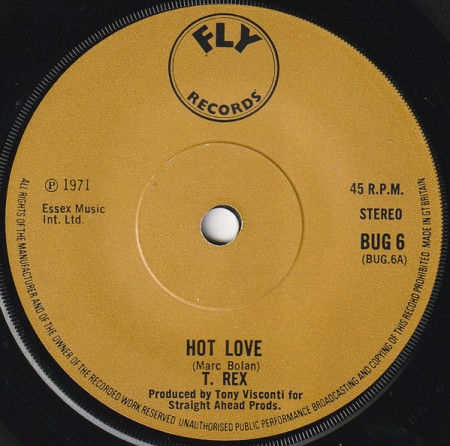 The last three minutes of this five-minute long record is a coda, a prolonged fade-out. La-la-la-lalalala… La-la-la-lalalala… Bored with aping Elvis, Bolan now thinks he’s The Beatles. The man was never short on confidence… The band as a whole were a force of nature – their drummer (this was the first T. Rex song to feature a drum-kit) had the stage name ‘Legend’, given to him by Marc, of course.

La-la-la-lalalala… it goes, on and on, with big drums, stomping and clapping, growing progressively more raucous, until a huge wig-out right at the end. Bolan mutters, then grunts, then moans. If this was it, then it would still be quite the legacy at the top of the charts. But there’s more to come. Much more. They had hit #2 a few months before with ‘Ride a White Swan’, and were embarking on a run of ten singles, none of which would chart lower than #4.