Aw yeah! T. Rex score their second number in less than three months. There are riffs, and there are riffs. This, baby, is a riff.

It’s a riff that growls and purrs, like a cat ready to pounce on its prey. Like a sports car purring at the start line, fuzzy and scuzzy. Then someone’s fingers slide down a set of piano keys – a glissando, if you want to be technical about it – and we’re off. Head first into the glam rock era.

Well you’re dirty sweet, Clad in black, Don’t look back, And I love you… Bolan’s in love with a vamp. You’re slim and you’re weak, With the teeth of a hydra upon you… She sounds like quite the woman. Get it on, Bang a gong, Get it on! Just what might he be singing about?

Sex. The answer is sex. Very few chart-toppers so far have been quite so up-front about the that fact they’re concerned with shagging, and nothing else. The only one that springs to mind, from a couple of years earlier, was ‘Je T’Aime’, and that was more funny than sexy. ‘Get It On’, though… Well, it’s all in the title. They might as well have called it ‘Let’s Fuck.’

Most of the time you’re not quite sure what Marc Bolan’s singing, and most of the time it simply does not matter. This is a record that sounds brilliant, that sounds like an idea come to life, and the lyrics are merely there to make up the runtime. And having looked them up, I’m not sure Bolan put more than two seconds thought into them: Well you’re an untamed youth, That’s the truth with your cloak full of eagles… and You’ve got the blues in your shoes and your stockings…. Dumb, and yet perfect. You just know that a girl with the blues in her shoes and stocking is going to be a handful.

There’s one line that’s always stood out to me – and I’ve loved this song a long time – and that’s: You’re built like a car, You got a hubcap diamond star halo… I have never met a woman who would take ‘You’re built like a car’ as a compliment. But, to be fair, if that line was going to work for anyone, it would be Marc Bolan. 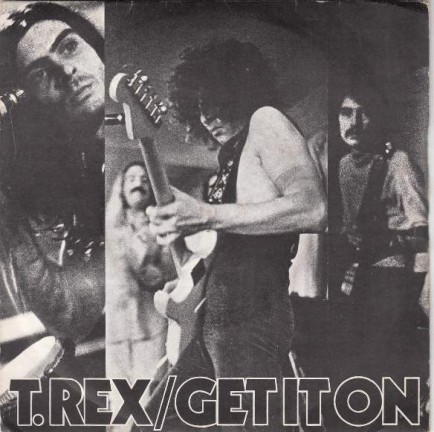 Even when he’s not singing, the brazen, filthy horns keep up the raunchy atmosphere. Then towards the end he simply starts breathing, and hiccupping, and it still sounds X-rated. The moment, before the final chorus, when he breathes in then out, with a little tremor, is the probably the sexiest moment in a #1 single so far, bar none. Bear in mind, T. Rex’s audience were teenagers. T. Rexstasy was here and, for the briefest of moments, they were the biggest band since The Beatles.

Then he shouts Take me! as he gives himself over completely to this woman, and we slide to a finish that includes a snippet of Chuck Berry: Meanwhile, I’m still thinking… A line from ‘Little Queenie’, the song that inspired ‘Get It On’. And while the similarity is not immediate, if you listen to it, buried beneath the vocals and the trademark Berry licks, the riff is there. Bolan brought it out and set it centre stage.

Such is the power of this riff that in the 1990s, Prince and Oasis took it in completely different directions and still made two superb singles. Prince dialled the smut up even further for ‘Cream’, changing ‘dirty sweet’ to ‘filthy cute’, while Noel Gallagher did what he does best on ‘Cigarettes and Alcohol’: shamelessly plundering, turning the guitars up to five-hundred, and making his band the biggest in the land. Shove those two song into a playlist, alongside ‘Little Queenie’ and ‘Get It On’, and you’re got yourself a brilliant fifteen minutes.

As for T. Rex, if ‘Hot Love’ was the start, then this was the push that sent them flying. They would dominate the British charts for the next two years, and we’ll be meeting them twice yet. ‘Get It On’ was also the band’s only US hit, reaching the giddy heights of #12. Like, seriously, America…?