Hot on the heels of Chuck Berry’s smut-fest ‘My Ding-A-Ling’ comes another Christmas novelty, and 1972’s festive #1. Two novelty chart-toppers in a row! Aren’t we the lucky listeners…? 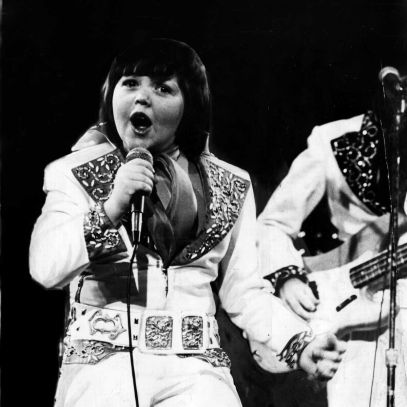 Long Haired Lover From Liverpool, by Little Jimmy Osmond (his 1st and only #1)

Actually no. We are not. For everything that ‘My Ding-A-Ling’ got right, ‘Long Haired Lover From Liverpool’ gets wrong… It’s not funny, it’s not subversive, it’s not got a bawdy bone in its body. It’s a nine-year-old boy singing a music hall ditty, and it is intensely, painfully, terrifyingly catchy.

I first listened to it a few days ago, after finishing my previous post, and it has been lodged in my brain ever since. I’ll… Be… Your… Long-haired lover from Liverpool, And I’ll do anything you say… Was Little Jimmy Osmond from Liverpool? No, obviously not. They were Mormons from Ogden, Utah. Had he ever been to Liverpool? Doubtful. But he’ll say he is, and that he has, for his sunshine daisy from LA…

He’ll also be her leprechaun sitting on a toadstool, her clown, her puppet, her April Fool… Anything she asks, as long as she’s his sunshine daisy from LA… You have to wonder if Little Jimmy had any idea what the hell he was singing. But he does it like a pro, like the youngest son from a family steeped in showbiz. Before I’d even seen any pictures of him, I could picture his cheeky grin and chubby cheeks. His voice is ear-piercingly high, especially on the title line, but then I suppose nine-year-old’s voices usually are.

It’s strange. On the one hand I am aware that this is a genuinely heinous piece of music. Meanwhile the other hand is tapping along happily. But lo! Suddenly, just past the two-minute mark, the song fades. Finished. I like to think that the sound engineer just couldn’t take it anymore and slid the volume dial down, while Jimmy and his band kept going for another three minutes, unaware…

‘Long Haired Lover From Liverpool’ had been written and recorded a few years earlier, by a Christopher Kingsley, and played on local radio. That’s where Mother Osmond heard the song and thought it would be perfect for her Jimmy. And it was – Osmond mania was sweeping the world in late ‘72. Little Jimmy was, apparently, particularly huge in Japan. We’ve had one Osmond at the top of the charts already this year, and I have to admit that I’d choose ‘Long Haired Lover From Liverpool’ over Donny’s ‘Puppy Love’ any day of the week.

At nine years and eight months old Jimmy Osmond was – and still is – the youngest artist to be credited with a UK #1 single. (Though younger children have featured on #1s, without getting a credit… more on that anon.)

And that’s that for 1972. What a strange year for chart-toppers! Some have been era-defining, others have been heart-breaking, while some have been hilarious. And a few have just been really, really bad. Roll on 1973!