We end our run of apocalyptic #1s at two, and turn to another of human kind’s most primal concerns. From death and survival, to sex… Though if the end of the world were nigh, you could probably do a lot worse than closing the curtains, dimming the lights, and slipping this disc onto the turntable… 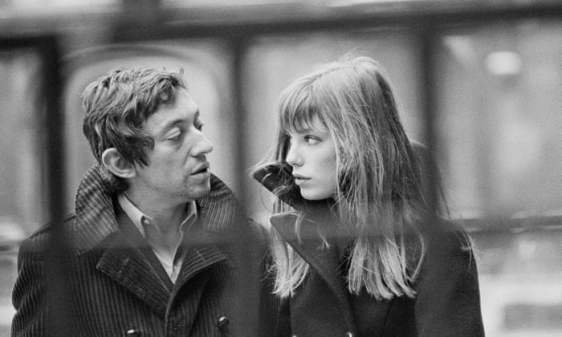 Je T’Aime… Moi Non Plus, by Jane Birkin and Serge Gainsbourg (their 1st and only #1)

I mentioned Peter Sarstedt’s ‘Where Do You Go To…’ as a French #1. (Well, it was set in France, and the melody sounded French.) But this is the French #1. For a song to sound any more French, Edith Piaf would need to be singing ‘Frere Jacques’ on top of the Arc De Triomphe.

‘Je T’Aime…’ is a record that you picture in soft focus. All pinks and whites, scattered glasses of champagne with raspberries in them. The organ drones, the drums woozily keep time, and the strings flutter around the edges. I particularly love the filthy growl in the bass just before the main riff. Meanwhile Jane Birkin and Serge Gainsbourg breath, whine, mutter, whisper, and moan… Do everything but actually sing.

The lyrics are all en Francais: Je t’aime, Je t’aime, Oui je t’aime… sings Jane. I love you, Yes I love you! Moi non plus… mutters Serge. Me neither. Jane: Oh, mon amour… It’s been written off as nonsense – ‘I Love You, Me Neither’ – but I think it shows that the singers only have lust on their minds. From now on I’ll write the lyrics in English, even though they sound much better in French…

Like a vacillating wave, I go, I come and go, Inside of you… Ooh la la! Potent stuff. Even worse if you translate the Inside of you line literally. Entre te reins = Between your kidneys. Kind of gross. By the end, Birkin is faking a pretty convincing orgasm. At least, we think she’s faking… At the time there were rumours, or some well-contrived publicity, that ‘Je T’Aime…’ was a chart-topping single with live sex (!) on it.

Even today, in our cynical world, a record like this would raise eyebrows. In 1969, there was a fair amount of controversy. The record was banned, obviously, from radio, except in France, where it could be played after 11pm. The Vatican excommunicated the Italian label exec. who released it. Gainsbourg was unrepentant, claiming that it wasn’t about sex, but about the impossibility of true love. Others have argued that it is a feminist song, thanks to the line at the end when Birkin breathes: Non! Maintenant! Viens! (No! Come! Now!) She is in control of the love-making.

At the same time, while ‘Je T’Aime…’ is still a fairly attention-grabbing record, it also comes across as very camp and kitschy. I’m sure most people were buying it for a laugh, rather than as a soundtrack to romantic nights in. It’s also suffered the same fate as, say, ‘The Good, The Bad and The Ugly’, in that it’s become a cliché – a piece of music to play over a certain scene: in this case one involving a comical seduction. I’m not sure if or why anyone would want to sit down today and listen to it. Plus, at four and a half minutes it goes on for much longer than it needs to. But… In 1969 people lapped it up. ‘Je T’Aime…’ had already reached #2, been banned, then re-leased to make #1!

Birkin and Gainsbourg were a real-life couple when they recorded their sole chart-topper. She was twenty-three, he was forty-one. Their daughter is the actress Charlotte Gainsbourg. Serge had originally recorded it with Brigitte Bardot, but her husband had stopped them from releasing it. I know very little about their other recordings. Birkin still sings and acts to this day; Gainsbourg meanwhile is a legendary figure in France – provocative and boundary-pushing. It’s sad that most English speakers know him solely for this record, his chain-smoking and for the famous TV interview in which he told a young Whitney Houston that he wanted to ‘fuck her’ (his words.) He died in 1991 after years of alcoholism.

A notable #1 then – the first in a foreign language, the first to feature simulated sex, the first to get somebody excommunicated. And suddenly we’re three chart-toppers away from the 1970s!