So, um… Our next number one single, from the spring of 1972, is… *checks notes*… a bagpipe instrumental.

Amazing Grace, by The Pipes & Drums & Military Band of the Royal Scots Dragoon Guard (their 1st and only #1)

I really don’t think I can write anything interesting about the record itself. It is literally just the well-known hymn, ‘Amazing Grace’, played by a military band. There have been plenty of outliers hit the top of the charts before this – singers and styles that have stood out like a sore thumb against the sounds of the time – Russ Conway’s piano, Frank Ifield’s yodelling, traditional ballads from the likes of Ken Dodd and Des O’Connor. None, though, have stood out as much as this.

Why was this a huge, five-week #1 single? There must be a story behind it. ‘Amazing Grace’ had been recorded in a popular version by American folk singer Judy Collins in 1969, whose arrangement the Royal Scots Dragoon Guard copied. Hers was a statement against the Vietnam War, part of the late sixties counter-culture that gave us ‘Woodstock’ and ‘In the Year 2525’. Meanwhile, Johnny Cash, Rod Stewart and Aretha Franklin all recorded their own versions of the hymn in the early to mid-seventies.

Is it that simple, then? A record by some soldiers – albeit not ones directly involved in any conflict – appealing to a public that were seeing images of war on their TV sets every night? I’m not a religious person, but ‘Amazing Grace’ is a spectacular piece of music, one that touches somewhere deep within. It’s one of the best known songs in the English language, and so for it to appear at the top of the charts in some form seems apt, though it was apparently much more popular in American churches than in the UK. 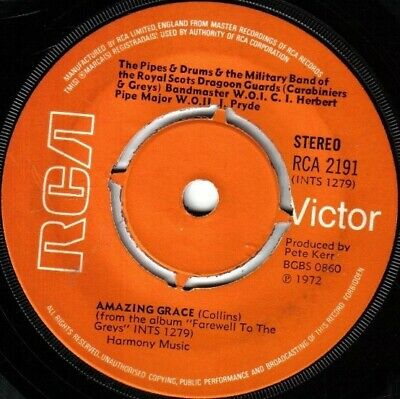 A bit of history: ‘Amazing Grace’ dates from the 1790s, instantly making it one of the very ‘oldest’ chart-toppers. Its writer, John Newton, had been a slave trader whose ship ran aground in a storm. This caused him to reassess his life, become a clergyman, and write this hymn about his experiences: Amazing grace, How great thou art, That saved a wretch like me… In the 1800s it became an abolitionist anthem and then very popular in African-American churches.

My problem with this record lies not in the religious-ness of it, or that it’s old-fashioned… My problem is with the bagpipes. I am Scottish. Yet I hate the sound of bagpipes. Something went wrong, somewhere, and I malfunctioned. It’s like being a cat that has no interest in pieces of string. Where most people hear a heart-tugging call from the misty glens and shimmering lochs; I just hear a shrill banshee-shriek. Listen to the first five seconds of this record: the drone and then the shriek. It’s not pleasant.

I enjoy it more when the brass section takes over in the second half of the song. But by the end we’re back to the lone piper. Except pipers are never really ‘lone’: they’re ten-a-penny on Edinburgh’s street corners in summer, quite often blasting out dirges like this. In conclusion, then, I’m with the stuffy old Director of Bagpipes at Edinburgh Castle who, when this record hit the charts, summoned the Pipe Major of the Royal Scots for a dressing down. How dare he demean the venerable bagpipe by featuring it on a pop record! Sadly for him, and all bagpipe haters around the world, ‘Amazing Grace’ is not even the biggest hit record of the 1970s to feature the instrument… Sigh.

15 thoughts on “312. ‘Amazing Grace’, by The Pipes & Drums & Military Band of the Royal Scots Dragoon Guards”