You know how, nowadays, when seen through jaded 2019 eyes, ‘The Exorcist’ isn’t that scary, and ‘Lady Chatterley’s Lover’ isn’t that shocking, and ‘Rock Around the Clock’ sounds a bit lightweight? Well, I wondered if the same might happen here. If ‘(I Can’t Get No) Satisfaction’, one of the angriest, most provocative singles of the sixties, might have lost its edge. 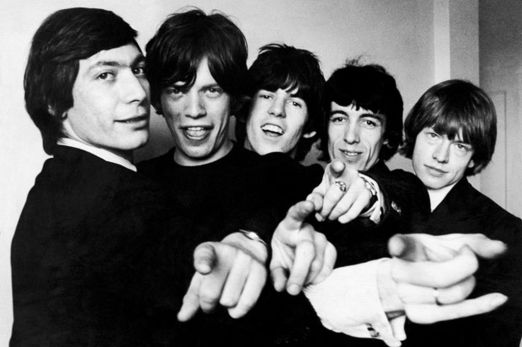 (I Can’t Get No) Satisfaction, by The Rolling Stones (their 4th of eight #1s)

Press play, though, and let that jackhammer of a riff run through you. That scuzzy, incessant guitar which sounds as if it’s ripping your speakers open, that doesn’t let up right through this near four-minute song. You soon realise that this fifty-five year old song is still full of spite and aggro.

Jagger’s vocals, when they come in, are – in contrast – soft, almost whispered. I can’t get no, Satisfaction… Cos I try, And I try, And I try… But he quickly build ups to the famous shout: I Can’t Get No! It’s a statement of intent. A rallying cry. I love the fact that it knocked ‘I’ve Got You Babe’ off the top spot.

Then we get to the verses. And, again, we’re treading new ground here. This is a #1 single with an attitude, and a conscience. When I’m drivin’ in my car, And a man comes on the radio, An’ he’s tellin’ me more and more, About some useless information… It’s a critique on commercialism, and capitalism, in a pop song! Later on, Mick is watching TV, and is getting fed up with all the adverts for clothes detergent and cigarettes. It’s leaving him unsatisfied, empty. We’re a long way from ‘I’m Into Something Good’ here. Now, The Stones were no hippies. That’s for certain. They’ll try their hand at psychedelica, for a while, but their hearts won’t be in it. Yet this is definitely one of the first counter-culture, ‘stick it to the man’ hit records. Hippyish in spirit; certainly not in sound. 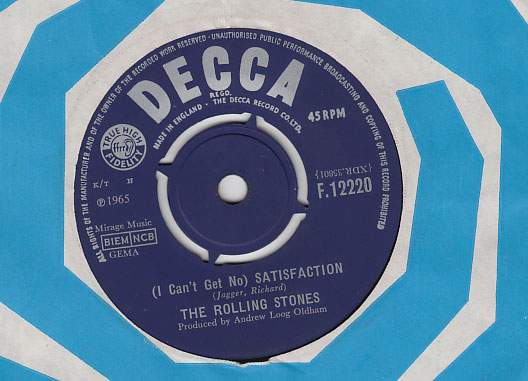 However, it’s the final verse that, at the time, caused most of the controversy. ‘Satisfaction’ was either edited down, had its lyrics changed, or was simply not played at all on British radio and TV. Because suddenly Jagger’s not singing about existentialist ‘satisfaction’ – about being bombarded with advertising bullshit. He’s talking about the other kind of ‘satisfaction’. The girl reaction kind. This is The Stones, after all. And I had no idea, until it came to writing this post, that the line in which the girl turns him down due to her being on a losing streak was a reference to her having her period!

It ends, much like their previous #1, ‘The Last Time’, with a bit of a wig-out, with Jagger yelling the famous refrain out over the fade. Every time I write about a Stones chart-topper, I mention how ‘nasty’, or how ‘grown up’ they sound, in comparison to everyone else around at the time. And they are getting nastier by the record. Compare their jaunty, bluesy debut at the top – ‘It’s All Over Now’ – to this.

This might be their fourth number one, meaning that we are halfway through their chart-topping run, but you can argue that it wasn’t until ‘Satisfaction’ that The Stones truly arrived. Gone were the covers of old blues songs. Jagger and Richards were now the main song-writing duo, with Brian Jones ably assisting. This was their first US #1, and suddenly they were the (second) biggest band on the planet. And if you think that this is a nasty, cynical, rebellious piece of rock ‘n’ roll, just wait until you hear their next chart-topper, coming up very shortly indeed.