Ladies and Gentlemen! For the eighth time in under two years! It’s… Oh, I can’t be arsed. Not really. Look – Elvis is #1. Again. 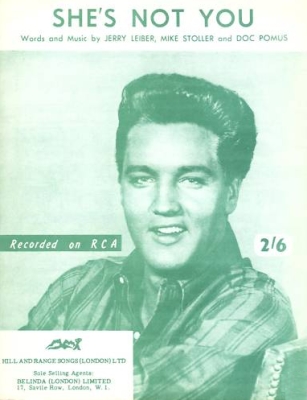 In my post on his last chart-topper – the soporific ‘Good Luck Charm’ – I crafted a pretty nifty (if I do say so myself) metaphor in which Elvis’s career equalled a long-haul flight. We were five hours in, meal-trays cleared, lights dimmed etc. etc. Very smooth sailing. And if you were hoping for a bit of turbulence with this latest record then you will be left disappointed. ‘She’s Not You’ is basically ‘Good Luck Charm’ Pt. II. Same tempo, same half-asleep Elvis. In fact, I’m pretty sure that both songs use the very same backing track (**stokes chin thoughtfully**)

I must admit that, despite this song’s utter basic-ness and the fact that clearly very little effort went into the writing or the recording of it, I do like it. I always have liked it, ever since I got that Elvis Greatest Hits collection way back when. There are the bumbabumbabumbabums for a start, and the piano solo that always makes me imagine a bumblebee hovering over a flower. And it has a bit of a swing to it, most notable in the bridge, when Elvis slurs that line: And when we’re dancing, It almost feels the same… (For years I thought it was It’s so confusing…) There’s something cool, really, about auto-pilot Elvis. About Elvis not even trying, yet still dragging songs like this to the top of the charts just because he was Elvis Fucking Presley. 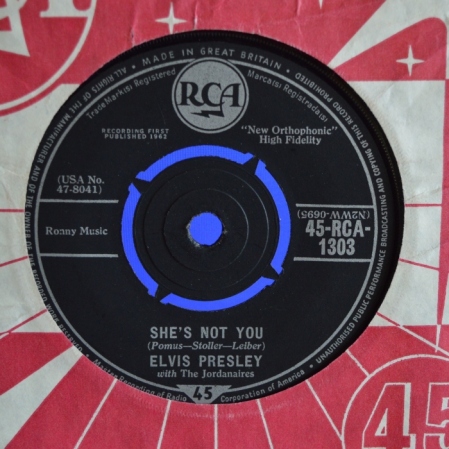 Interestingly, this is the first time since the 1950s that Elvis has hit the top with two similar sounding discs. Last year, he was veering from opera to rockabilly to lederhosen. Maybe, then, the similarities between ‘Good Luck Charm’ and ‘She’s Not You’ – his eleventh and twelfth UK #1 singles – say it all about his mid-career malaise. And it’s needless to say that there is absolutely no rock ‘n’ roll to be found here. This song has had the rock sucked right out of it. This is pure, 100% middle of the road pop.

As I find in every post I write about Elvis these days, I’m out of things to say pretty quickly. We all know he’ll be along again soon, so let’s save it for whenever we see him next. I do want to note, however, just how quickly we are racing through 1962. ’61 took us on a variety of detours, down all sorts of one-week bye-ways, but ’62 has been marked by big records spending huge chunks of time at the top. Only twelve songs will make #1 in this year, the fourth lowest total in chart history (after 1954, 1992 and 2016, fact fans.) After just three more chart-toppers we will be in 1963: the official start of the ‘Swinging Sixties’ and modern pop music as we know it… Hold on, people. It’s coming.