I feel it is time to make one of my semi-regular proclamations about just where we are in popular music history. Remember back in March ’56 when I announced the beginning of the ‘The Post-Pre-Rock Age’ (i.e. after the pre-rock era but before the rock era had really got going)? Or when we killed off the first wave of rock ‘n’ roll in early ’57? Or when we passed through the ‘Age of Whistling’ a year or so ago? Well… What with The Platters’ stately ‘Smoke Gets in Your Eyes’ now grabbing a week at the top, all but one of 1959’s four chart-toppers have been ballads.

Smoke Gets in Your Eyes, by The Platters (their 1st and only #1)

Elvis aside, we’ve had Jane Morgan’s ‘The Day the Rains Came’ (very jazzy, but still what I’d class as a ballad) and Shirley Bassey’s ‘As I Love You’, plus Conway Twitty’s ‘It’s Only Make Believe’ from the tail-end of last year further slowing things down at the top, and this record does nothing to change the tempo. I’m not sure that this four-month stretch qualifies as an ‘Age’ or an ‘Era’, but I feel confident enough in christening it ‘The Winter of the Ballad’.

I’ve been a bit harsh on ballads recently. I didn’t hate either the Jane Morgan or the Shirley Bassey efforts, but they did rather pass by without grabbing me. I think it’s because, while you can chuck a load of guitars and drums at a rock song and usually come out with something passable, ballads are a lot more delicate. They can be great, or they can go really, really wrong. Lay the strings on a bit thick, let the singer go a little too wild with the vocal gymnastics, or have the writers get too schmaltzy with the lyrics, and you’ve got a mess on your hands. But this… now this is a ballad that gets it RIGHT.

It starts slowly. No dramatic swirl of violins or crashing cymbals. Just a piano, and a voice. They… Ask me how I knew, My true love was true, Oh…. I of course replied, Something here inside, Cannot be denied… The singer is sure that his woman loves him; his friends are less convinced. The singer scoffs. But…

Yet today, My love has flown away, I am without… My… Love… His friends – who sound like dicks, by the way – laugh at him and his misplaced confidence. His reply? I smile and say, When a lovely flame dies, Smoke gets in your eyes… 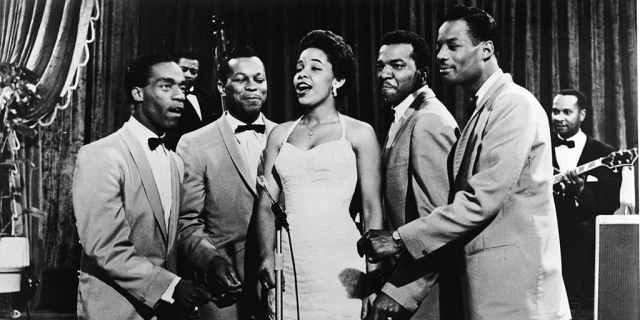 What’s the difference then, between this ballad and the one it replaced at #1: ‘As I Love You’? If pressed, I’d have to say the lyrics. While Shirley Bassey was singing – albeit very beautifully – some trite lines about the thrill of being in love; this song employs some great imagery. Your heart’s on fire – smoke gets in your eyes and stops you from seeing clearly. The flame is extinguished; smoke gets in your eyes and makes you cry…

Still, though, there is a big, bombastic ending – the title of the song belted out at the top of the singer’s voice – which spoils things slightly. I just have to accept that it was the style of the time. It’s a great song, however; a classy song. A classy classic. And a ‘classic’ it truly is, having first been recorded back in 1933. It seems to have been something of a tactic in the late fifties – getting modern singers to record updated versions of songs from the twenties and thirties (Connie Francis did it on ‘Who’s Sorry Now’ and ‘Carolina Moon’, while Tommy Edwards borrowed an old melody for ‘It’s All in the Game’) to lure in both the kids and their parents.

This is The Platters’ one and only appearance at the top of the UK charts, but that does their reputation something of an injustice. They had had several Top 10 hits before this, and were the foremost vocal group in the US – quite an achievement considering that they were five black guys and a girl, and that this is the 1950s we’re talking about. They are still rolling on to this day, albeit with enough line-up changes to make The Sugababes look steady (Wiki lists ten past members).

Unlike the earlier tear-jerkers that have made up this ‘Winter of the Ballad’, I had heard this one before. I’m sure most people will have. It’s one of those songs that have become part of life’s backing track. And to know a song without knowing how you know it – as I’ve said before – is a sure-fire sign that said song is a stone-cold classic.