So what do we have here, then, for the first #1 of 1959? Well, the intro is promising: trumpets, saxophones…? Some kind of brass section at least. Ba-da-da-da-da-da-da…Bum-bum-bum… I would describe it as an intro you could strip to, if that weren’t being slightly tasteless.

The Day the Rains Came, by Jane Morgan (her 1st and only #1)

Does the rest of the song live up to this saucy promise? Well, no. Not if you truly were expecting some kind of chanson d’amour. The title kind of gives that much away. It’s a song about rain, flowers, and crop cycles: The day that the rains came down, Mother Earth smiled again… Now the lilacs could bloom, Now the fields could grow greener… Further lyrics follow about buds being born and rivers swelling.

It’s an extended metaphor of a song – all the nature that is blooming is mirrored in the love blooming between the singer and her beau. As the young buds will grow… So our young love will grow… Love sweet love… Morgan’s voice is prim and clipped, harking back to the era of Doris Day and Vera Lynn. She sings it crisply, and properly, but it does come across as rather old-fashioned. She’s no Connie Francis, that’s for sure.

It’s reminiscent in many ways of singers like Jo Stafford and Kitty Kallen, jazz-pop from the very earliest days of the chart. Listen to the bridge in particular, the lines that begin: A robin sang a song of love, A willow tree reached out to the heavens… and tell me that it doesn’t reek of 1954. And the ending… Oh the ending. Ms. Morgan absolutely belts it out – Raaaaiiiiinnn Sweeeeet Raaaaaaaaaaiiiiiinnnnnn! – in a way that nobody else on a chart topping record has done for years. Is this perhaps our first throwback record? The first chart-topper that is intentionally harking back to days gone by, years before acts like Showaddywaddy, Shakin’ Stevens and, erm, Oasis? It certainly wasn’t an old song, having been written, originally in French, and recorded in 1958. 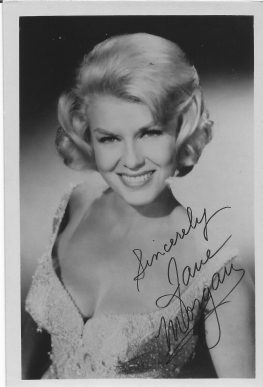 I don’t dislike this record. The instrumentation is great, with a real swagger to the drums and brass. It’s just a shame that the lyrics are so wishy-washy. It’s technically ‘The Day the Rains Came Pt I’, as Part II is the same song sang by Morgan in the original French. Which is better to listen to, in a way (as long as you don’t understand French), as you can imagine that she is singing the saucy lyrics that the music is crying out for.

This may also be the first occurrence in the UK singles charts of a ‘January Number One’ – a record that takes advantage of the usual post-Christmas drop in sales to sneak a week or two at the top. It was a regular thing from the seventies through to the nineties, and can still happen today – see Eminem’s ‘River’ from January this year. And I’ve mentioned before how much I admire a good ‘one song-one week’ chart-topping record. Jane Morgan hadn’t troubled the upper reaches of the UK charts, let alone the number one spot, before this and wouldn’t do so again. And – following on from Tommy Edwards, Lord Rockingham’s XI and Conway Twitty – I make her the fourth consecutive one (ish) -hit wonder chart topper!

To conclude, then. This is a nice enough diversion, a snazzy little jazz pop number; but one which sounds pretty out of place as the first #1 of 1959. Let’s get back on track, shall we…