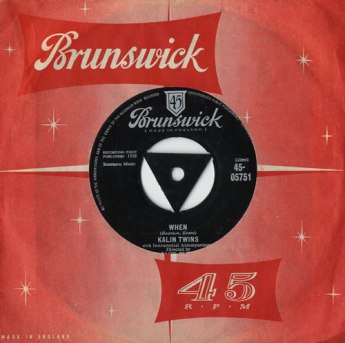 We’re really getting further into the realm of ‘Songs That I Know’, now. Out of all our 1958 #1s up to this point there has only been one song that I truly hadn’t heard before: Michael Holliday’s ‘The Story of My Life’.

And ‘When’ by The Kalin Twins was all set to become the second 1958 chart topper I had never heard before. But then I pressed play… And I know this. I think. I’ve heard it before. I think…

It begins with perhaps the most fifties intro ever. Clickety-clack-clack… and then… Sax-Sax-Sax-Woah-Woah-Woah. I’m possibly not doing the best job of describing it; just listen and you’ll hear what I mean. Images of boys in leather jackets and girls in polka dot skirts, spinning each other around at the juke joint while their friends sip milkshakes leap into your head. Play this intro to anyone on the street and ask what decade it comes from and they will say ‘Why, THE 1950s!’ with utmost, unshakeable confidence.

It almost, though, sounds too fifties. It sounds so fifties that it possibly couldn’t actually be from the 1950s. It sounds like fifties-by-computer-algorithm. Like filler on the ‘Grease’ soundtrack, like the background music in a Frankie & Benny’s. It’s kind of the same problem I had with Paul Anka’s ‘Diana’. And it’s a real chicken vs egg scenario: does it sound cheesy because it sounds so ubiquitous; or has it become ubiquitous because it always sounded cheesy and inoffensive? 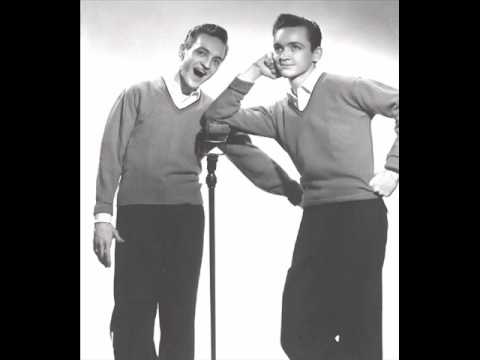 Anyway, enough of the philosophy. This truly has been the summer of the musical siblings, The Everlys followed by The Kalins. But whereas Don and Phil went on to become one of the most enduring and influential acts of the era; Herbie and Hal Kalin didn’t. They are complete and utter one hit wonders in the UK. And I love that. There’s nothing worse than a two hit wonder whose follow-up single limps to #38. Nope. Have your huge chart-topper, then leave it there. That way you can always claim that you could have been huge, had you been bothered… I’ve been less eagle-eyed when it comes to noticing UK chart firsts recently, but we have one here – the first ever twins to score a chart topping single. Bonus points if you can tell me the only other twins to do the same…

While I may have sounded slightly scathing when I described this record a moment ago; I am actually enjoying this track. It’s another sugar rush of a song – in the same vein as ‘Diana’ or ‘Rock-A-Billy’ – where you dive head first into a ball-pit filled with fruit pastilles, wine gums and the like, and come out buzzing but also feeling slightly grubby. Perhaps I should invent a new category of #1 for these posts: Songs It Is Impossible To Hate, No Matter How Much You’d Like To.

One thing does jar, however, and that is the high-pitched backing singers. They are super-shrill, tuned to almost dog-whistle levels. And I knew it reminded me of something, but it took me a minute to get there. EDDIE FISHER! Go back and listen to his 1953 #1 ‘I’m Walking Behind You’ and you’ll hear them. I don’t know what it is, but this is the 3rd post in a row in which I’ve mentioned Eddie Fisher – the man who put the ‘pre’ in pre-rock. He is a shadow that looms large, even after rock ‘n’ roll has long since blown those cobwebs away. If you have a spare minute, follow this link and remind yourself of just how bad it got during those dark, prehistoric days of 1953.

I realise that I am about to wrap this post up without having made any mention of ‘When’s lyrics. To be honest, I haven’t been paying attention, despite listening to it around six times in short order. Let me try once more… When, When you smile at me… When, When you kiss me right… I need you blah blah blah… I love you blah blah blah… I work with Japanese people, and these lyrics remind me of the sort of English banalities that get crowbarred into J-Pop songs. I’m thinking specifically of girl band extraordinaire AKB48, who regularly pepper their songs with trite English phrases: ‘I want you…’ ‘I love you…’ ‘Hold my hand…’

That is a truly bizarre comparison to end on: fifties one-hit wonders The Kalin Twins and 21st Century Japanese poppettes AKB48; but that’s where my mind took me. And it just goes to show that pop music is pop music, no matter the time or place…