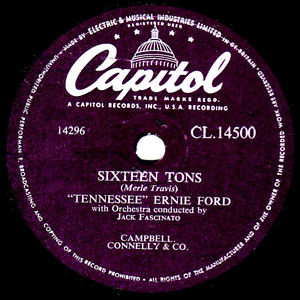 Hmmm… What’s going on here, then?

It is more interesting, I suppose, approaching these distant number ones – apart from the handful that I already knew – and not knowing what I’m going to get. It wasn’t always like this – for most of 1953 and ’54 the chart toppers followed a rather overwrought formula. Now they are growing much more eclectic.

But, at the same time, I feel ‘Sixteen Tons’ has been done before. We’re back on ‘Man from Laramie’, ‘Hernando’s Hideaway’ territory here – back in the cheesy Western soundtrack album. This is what I expected from a man named Tennessee Ernie Ford, much more so than his earlier, bombastic #1: ‘Give Me Your Word’.

It’s a song about loading something… coal, I think… Loading sixteen tons of it, to be precise. You load sixteen tons, what d’ya get? Another day older and deeper in debt. St Peter don’t you call me cos I can’t go, I owe my soul to the company store… The singer is a hard man; shovellin’ sixteen tons ain’t nothin’ to him, no Sir.

After describing his working day, he goes on to big himself up: raised by a lion, fightin’ and trouble are his middle names, if you see him coming then you better step aside etc. etc. One fist of iron, the other of steel, If the right one don’t get you then the left one will… It’s all a bit silly, but Ford sings it with tongue firmly in cheek. He even giggles at one point, as he delivers the line: Can’t no high-toned woman make me walk the line… He knows it’s silly – and the listener can enjoy it for what it is. But, importantly, he doesn’t disrespect the song. It’s skilfully done. I kind of wish it had been Tennessee Ernie singing ‘The Man from Laramie’, rather than stiff old Jimmy Young, as what that song dearly needed was a slightly looser delivery; a delivery with the eyebrows raised. I’ve had a look, but unfortunately can’t find any sign that he ever recorded a version.

The only musical accompaniment to the lyrics is a guitar/clarinet combo, some light drumming, and some finger clicks. It’s minimalist. In fact, almost all of the most recent number ones have toned down the orchestral accompaniment and the backing singers (‘Rose Marie’ and ‘Christmas Alphabet’, the simple guitar riff of ‘The Man from Laramie’ and ‘Hernando’s Hideaway’s castanets). Unfortunately, at the same time, ‘Sixteen Tons’ resurrects a technique that we haven’t heard for a while – the THIS IS THE END OF THE SONG! technique. We end on a long, drawn out repetition of the final I OOOOOWWWWEEEEEE MY SOOUULLL blah blah blah… line. It spoils the whole song, truly it does. The sooner this trick dies a death the better! 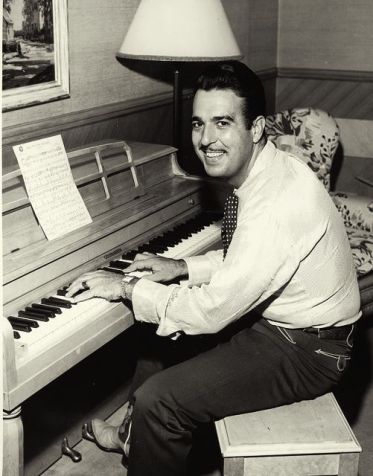 Each time I’ve listened to this track over the past half hour, somewhere in the back of my mind is the nagging suspicion that I’ve heard this somewhere before. I probably have – it is Ford’s signature hit, after all. And it’s a simple song. So simple that it sounds like it might be… Nope, I can’t place it.

And on that note, we will bid farewell to Tennessee Ernie Ford. But don’t you worry about him. He had a long and distinguished career back in the US, in the Country & Western world, releasing albums such as ‘This Lusty Land’, ‘Great Gospel Songs’, ‘Civil War Songs of the North’ and, er, ‘Civil War Songs of the South’ (maybe it was a ‘Use Your Illusion’ I & II kind of thing?) Whatever, he had clearly found his niche. He also had a TV show – ‘The Ford Show’ – and a catchphrase: ‘Bless your pea-pickin’ heart.’

Yee-hah! Let’s leave it there…